Since Paul Titheradge took over Mike Allen Services in 2016, he has transformed the business into Wiltshire’s leading Jaguar specialists. We head to Swindon to discover more

TWO-AND-A-HALF YEARS. That’s all it has taken for Paul Titheradge to turn a general garage in the centre of Swindon, Mike Allen Services, into Wiltshire’s leading independent Jaguar specialists. An impressive feat for the young technician. Just like his self-application to win an important award when he worked for Jaguar, it’s proof of Paul’s need to do things the right way. 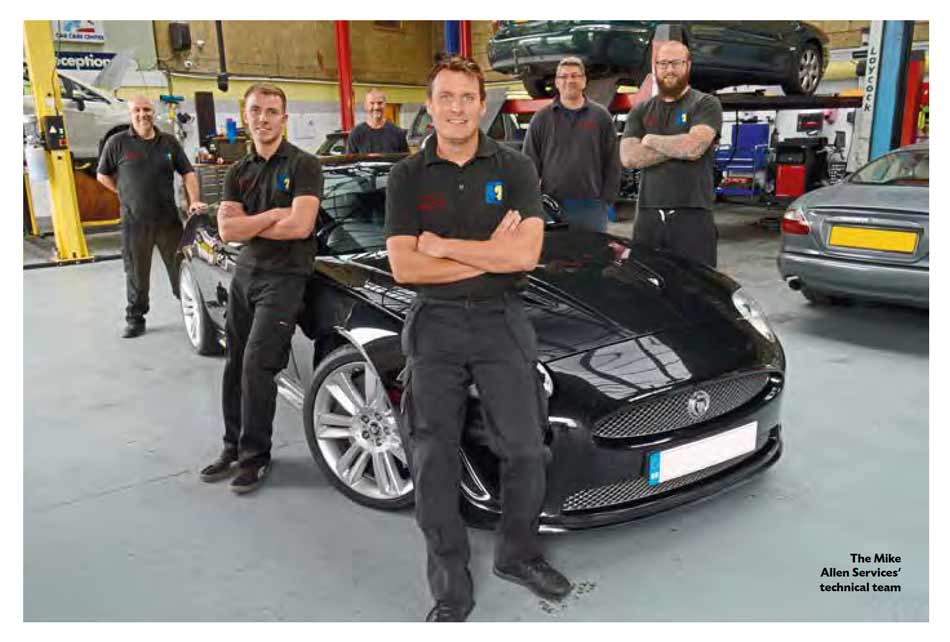 Paul started his Jaguar career in 1999, age 17, as an apprentice at Swindon’s Jaguar franchised dealership. He continued working there after his apprenticeship ended, eventually becoming a master technician and then workshop controller in 2006.

Three years later, Paul won the prestigious Jaguar UK Technician of the Year Award, a huge honour. “It involved a series of exam questions, online tests and the six finalists heading to Jaguar’s technical centre at Gaydon for practical tests,” he explains. A mirror that celebrates this win hangs in his office, a discreet but important indication of his background. Unsurprisingly, the victory was a major boost for his career at Jaguar and, not long afterwards, he became the service manager at the dealership before progressing to area manager, overseeing three garages. 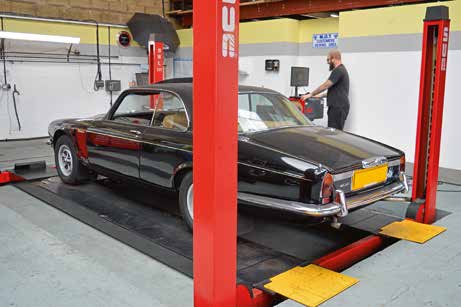 Mike Turasz at the MOT station

Yet, despite his success, Paul wasn’t all that happy. “I felt restricted in what I could do. I kept thinking I could do a better job,” he admits. “The higher up the corporate ladder I went, the less time I spent fixing cars, which I think is one of my key strengths, as is dealing with customers. Instead, I was sat in an office dealing with figures and looking at statistics, which bored the hell out of me.”

Paul also says he didn’t like the way Jaguar was heading. “We were losing the enthusiasts, the XJ-S and XJ40 drivers, becoming, in my view, too commercial and fleet-car orientated.”

And so, in early 2016, he took the brave decision to go out on his own and he knew exactly how and where.

Mike Allen had started his garage in 1985. Originally a Renault specialist, it later branched out into repairing all makes of car. But, after 30 years, Mike was looking to retire. “The name, reputation, location and the equipment the garage offered was perfect for what I wanted,” says Paul.

In a large and spacious former railway shed in the centre of Swindon and close to the train station, the workshop really does have the perfect location. “We get customers all the way from Bath and Bristol who can drop off their cars and then jump on the train home.”

Mike and Paul had originally spoken in 2014, but when Paul received promotion around the same time, and with another baby on the way, he decided to stay with Jaguar. “Two years later, I still had itchy feet, so Mike and I had another chat and came to an agreement.” In July 2016, the garage changed hands.

An XK8’s dial pack is refitted following a
bulb change

se he had a loyal customer base, which we’ve kept”), he always wanted to transform the garage into a Jaguar specialist. He has achieved this not only by using his own skills, installing two more ramps and investing in Jaguar diagnostic equipment, but also by employing two experienced Jaguar technicians: Simon Thomas, who was a service adviser at the Jaguar main dealer with Paul, and Mike Turasz, a master technician who worked at Jaguar dealerships for 16 years.

Mike Allen Services offers the same high level of technical service as a main dealer, but with a different ethos. “I’m strongly against the upsell mentality of many main dealers to generate additional work,” he tells me. “It doesn’t encourage long-term customers and it doesn’t install trust and faith. We do check customers’ cars over and recommend any work that wants doing, but we tell them honestly if it needs fixing immediately or if it can wait for another six months.” 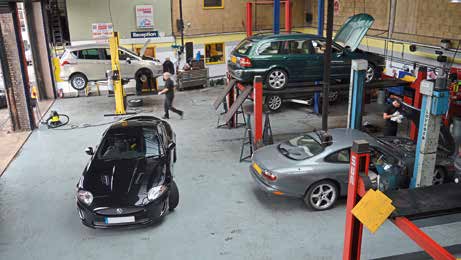 Mike Allen Services offers servicing and maintenance for all Jaguars, but Paul especially enjoys working on those from the early Eighties. “I was still seeing XJ40s and XJ-Ss during my apprenticeship, so know those cars well,” he says. And to keep himself and his mechanics up-to-date, they continue to attend Jaguar-run seminars on newer models as and when they’re available, including for the all-electric I-PACE.

Paul, though, also has plans to start restoring classic Jaguars. “We already look after a couple of E-types, but simply to service and maintain them,” he says. “I have a vision for moving into classic restoration.”
His technician Simon is already earmarked for this. He has a real passion for classic cars and previously worked at Jensen-specialist Cropredy Bridge. On the day of my visit, Simon is working on an XJ-S V12, getting that huge engine set up correctly.

Bearing in mind the short amount of time it has taken Paul to turn this successful – but general – garage into a popular Jaguar specialist, I don’t doubt he can make this happen, and to his usual successful standard.

About the Author: Paul Titheradge

Paul Titheradge was officially crowned Master Technician of the year by Jaguar Cars at Grange Jaguar Swindon. Paul started with the company at the age of sixteen as an apprentice technician. He progressed through to Master Technician, Workshop Controller and Assistant Service Manager. Paul has worked with Jaguar cars in Swindon for over 17 years. Coming from a main dealer background where he completed his apprenticeship, for the last 8 years Paul has been the Service Manager of one of the most successful Jaguar Dealerships in the UK. Wiltshire Jaguar Centre was in formed in 2016 by Jaguar master technician and award winning technician Paul Titheradge . Paul and his team provide the expertise and care of your Jaguar car without the costs associated with visiting a main dealer.